I think it’s finally time that I take better control of my mind. I think that for too long I have been clouding it with toxic things that don’t add value to my life. I think that I have done a terrible job at protecting myself from the bs on social media and the internet.
I started a mental cleanse at the beginning of the year, and I already feel SO much better! It’s hard to describe, but I am going to try to explain it to you as best I can.
Change your mind, change your life Click To Tweet
I’m sick of the internet.
I don’t know about you, but I am absolutely FED UP with television, movies, and the internet. I can’t stress enough how much I hate it all. But I think this is because I haven’t been using these things to benefit my mind in the right ways.
Over the years, I spend more and more time on the internet. I watch YouTube more than I watch tv, I read blogs more than I read books, and I watch Netflix wayyy too much.
All of these things separately probably don’t seem so bad. It’s when you put them all together that they can have a huge affect on my mental state and mind set.
Just like everything else, the internet has been ruined. STUPID content creators (who are not even worthy of being named) are slowly ruining YouTube. The owners of all the social media platforms are ruining these social powerhouses by creating STUPID algorithms that have absolutely destroyed my feeds. I’m honestly over all of it. The problem is, that I can’t just be over it.
The reality is, everyone is online now days. If I want to connect with my friends and family, I use Facebook. If I want to see fashion and beauty, I look on YouTube or Instagram. There are endless possibilities at my fingertips every day that I just can’t simply be ‘over’
I wanted to clear my head-for good.
So, I started a mind cleanse at the beginning of 2018. I evaluated the things that I put in my mind every day. The things that I read, and watch. I decided to make some changes and It’s been almost a month and I can already feel an INCREDIBLE difference.
After removing negative things from my mind, I have seen a major change in my mind. Here are some of the things that I’ve been doing to help improve the quality of things I put in my mind.
I stopped reading trending topics, and that alone improved the quality of my life.

This is just my personal opinion, but Facebook trending news is absolute garbage. After a terrible time in 2016 and 2016 where every couple of months people were watching someone get shot by police live on camera, I had to stop reading the trending news. I was completely disgusted and ashamed at the things that we put so much focus on as Americans. People dying had everyone talking it was more like hot gossip, instead of a serious issue.
That is not what I’m about. That kind of stuff does nothing positive for me or anyone in my opinion. And of course during election times, social media is at its worst. I simply could not. So I stopped looking at trending topics all together. Not on facebook. Not on twitter. Nothing. And since most of the trending stories are negative, I already notice a difference!
I don’t wake up to terrible things anymore. I couldn’t tell you what off the wall crap Trump has said lately, I have no clue what is going on and it is amazing.Promote your blog and grow your socials in my Facebook group! Details here!
I stopped watching the news.
Oh yes, Facebook news is different than the actual news. The news that we see on television is also super depressing, toxic, and just not valuable to me. I unfollowed all news stations from all of my social media account, and I ditched cable a long time ago, so I haven’t seen the news in a long time.
Until I had to get a new windshield put in my car. I waited for an hour, and there was a TV in the waiting room. As much as I wanted to avoid it, I couldn’t because the volume was too loud. Guess what was on the news? A bunch of garbage.
People arguing over who is responsible for the government shutdown, an update on the 13 children who were chained in their house or something like that, and an attempted child abduction. Oh my gosh. Straight POISON filling my brain. It was SO annoying. The worst part is that even though I was the only one in the waiting room, I was unable to control the volume.
But it made me realize that people pump their brains with this nothing but negative crap EVERY SINGLE DAY. And it truly doesn’t make any sense to me. I feel SO much better now that I have not watched the news in a while.
I cleaned out my social media.
Over the years our social accounts become clogged with things that we are no longer interested in, people who we no longer really speak to, things that we’ve liked in the past but aren’t relevant to us now. Or you could be like me, someone who just happened to be following accounts/people who weren’t bringing value to my life.
It took forever to do because I didn’t want to delete the wrong people, but now that It’s done, It feels so much better. I replaced all toxic accounts with accounts that inspire me. Travel bloggers, photographers, fashion bloggers, etc. Here are some Instagram accounts to follow if you love travel and photography.
I’m extra careful with what I put in my mind.
I happen to love reality TV, Jerry Springer, and stories of unsolved crimes and murder. I know it’s pretty grim. None of these things bring any kind of value to my life. In fact, watching Crime Watch Daily caused me to have nightmares occasionally.
Definitely not the kind of dreams that I want to have. Now I have a rule, if it doesn’t teach me anything, or add value to my life in some way then I won’t watch it. This is hard because Insidious just came out as well as It and while I would love to watch them both, I wont because they won’t do anything positive
Meditate!
I must admit that I actually suck at meditating for the most part, So I do whatever works for me. Sometimes it’s music, sometimes It’s taking a candle light shower, sometimes It’s sitting in peace and quiet gathering my thoughts. Either way, it helps. It also helps manage my anxiety– which I am constantly trying to keep under control.
Surround yourself with nothing but positivity! It sounds so simple but it really does make a huge impact on your daily life. Read books that inspire you, watch youtube videos about things you are passionate about, make life goals and plans to achieve them! I promise you can do it! 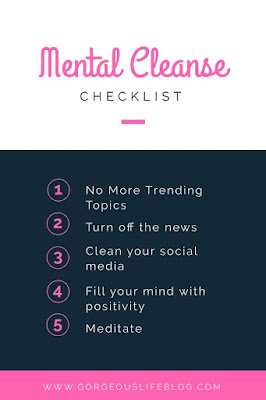 Do you think social media and the internet can have a negative affect on people? Let me know in the comments. I love chatting with you!
Tweet
Pin
Share

You may also enjoy:

My name is Victoria, and I am obsessed with helping you create your dream life and take yourself to the next level.